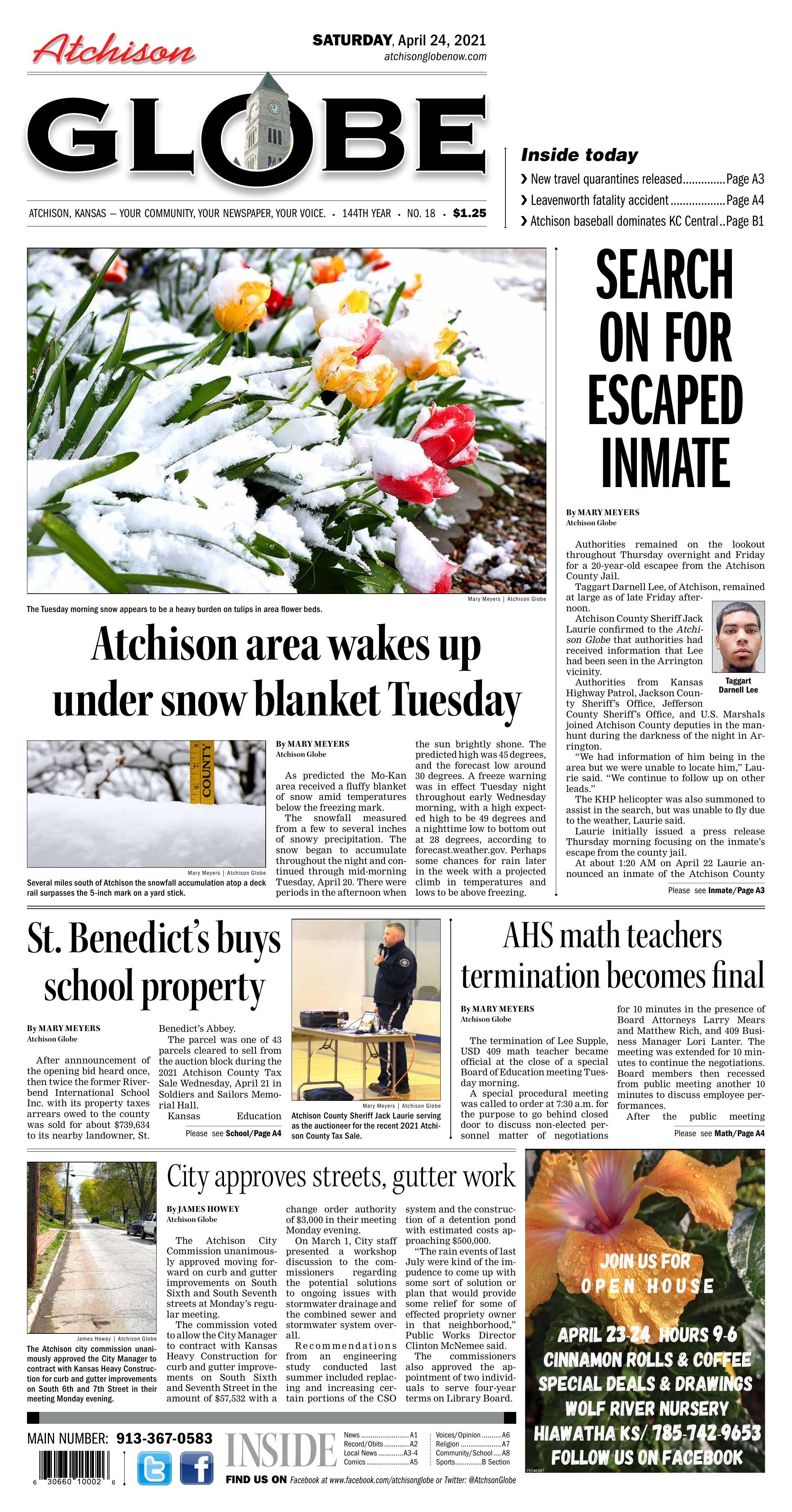 The Tuesday morning snow appears to be a heavy burden on tulips in area flower beds.

Several miles south of Atchison the snowfall accumulation atop a deck rail surpasses the 5-inch mark on a yard stick.

A large scavenger bird in flight Tuesday morning over the Missouri River bluffs along Riverview Drive.

As predicted the Mo-Kan area received a fluffy blanket of snow amid temperatures below the freezing mark.

The snowfall measured from a few to several inches of snowy precipitation. The snow began to accumulate throughout the night and continued through mid-morning Tuesday, April 20. There were periods in the afternoon when the sun brightly shone. The predicted high was 45 degrees, and the forecast low around 30 degrees. A freeze warning was in effect Tuesday night throughout early Wednesday morning, with a high expected high to be 49 degrees and a nighttime low to bottom out at 28 degrees, according to forecast.weather.gov. Perhaps some chances for rain later in the week with a projected climb in temperatures and lows to be above freezing.

The Atchison city commission unanimously approved the City Manager to contract with Kansas Heavy Construction for curb and gutter improvements on South 6th and 7th Street in their meeting Monday evening.

The commission voted to allow the City Manager to contract with Kansas Heavy Construction for curb and gutter improvements on South Sixth and Seventh Street in the amount of $57,532 with a change order authority of $3,000 in their meeting Monday evening.

On March 1, City staff presented a workshop discussion to the commissioners regarding the potential solutions to ongoing issues with stormwater drainage and the combined sewer and stormwater system overall.

Recommendations from an engineering study conducted last summer included replacing and increasing certain portions of the CSO system and the construction of a detention pond with estimated costs approaching $500,000.

“The rain events of last July were kind of the impudence to come up with some sort of solution or plan that would provide some relief for some of effected propriety owner in that neighborhood,” Public Works Director Clinton McNemee said.

The commissioners also approved the appointment of two individuals to serve four-year terms on Library Board.

Multiple bidders were present for the 2021 Atchison County Tax Sale Wednesday, April 21 at Soldiers and Sailors Memorial Hall in Atchison.

After annnouncement of the opening bid heard once, then twice the former Riverbend International School Inc. with its property taxes arrears owed to the county was sold for about $739,634 to its nearby landowner, St. Benedict’s Abbey.

The parcel was one of 43 parcels cleared to sell from the auction block during the 2021 Atchison County Tax Sale Wednesday, April 21 in Soldiers and Sailors Memorial Hall.

Kansas Education Holdings, LLC, the former owners of the Riverbend School were in arrears to the county for more than $429,774 in property taxes, interests and penalties. Additionally, there are sizable sums of money owed to faculty and staff to cover unpaid wages from February -May 23, 2018 when the school was in operation, according to Atchison Globe files. Some monies were also some owed to investors. To get to the point of its sell this week, the property had been subject to liens and mortgage foreclosure filed in Atchison County District Court.

Atchison County Counselor Patrick Henderson said the excess proceeds from the Riverbend property is about $309,869, in accordance with Kansas Statute 79-2803 any excess proceeds are subject to court order to be “paid upon due proof to the owner or party entitled thereto.” According to court documents it appears to be former Riverbend Principal Paul Ogle and the rest of the school’s faculty and staff holding a mortgage against the property for about the same amount as the excess after the back taxes owed to the county, Henderson explained.

When it comes time to distribute the proceeds from the tax sale the county will be the first priority. The other liens will be addressed according to distributions as ordered by the court. The court orders will determine payments and interest, if applicable, to ensure distributions go to lienholders, if any, and eligible parties involved with any delinquent properties.

There were 57 registered bidders who were eligible to start the bidding at $38 for a parcel. Nine properties sold at that amount, while some bidding escalated a bit more. One bid climbed to more than $21,000 to purchase property at 1104 Santa Fe Street. Twelve properties failed to garner any bid, Henderson said.

Buyers will likely have clear titles and deeds to the properties in about a month, Henderson said. The process for the paperwork includes confirmation order and hearing for approval before ownership becomes official. The total proceeds from the sale checked about $832,835.

Henderson said the process has already started to identify parcels eligible for the next tax sale that he is targeting for March of 2022.

The sale on Tuesday was actually de-railed a year due to the coronavirus pandemic. During the pause there were some modifications made from previous years like the sale location was traditionally near the courthouse steps, or in the main courtroom. The venue was re-located to allow for social distancing.

Interested parties and potential bidders had the option to pre-register for numbers online, Henderson said. The pre-registration offered the auction clerks more time to verify potential buyers’ eligibility like to make sure all taxes are paid in full before assigning bidding numbers.

“It went pretty well,” Henderson said after the sale. “The purpose is to collect taxes, and we’ve done that.”

Authorities remained on the lookout throughout Thursday overnight and Friday for a 20-year-old escapee from the Atchison County Jail.

Taggart Darnell Lee, of Atchison, remained at large as of late Friday afternoon.

Atchison County Sheriff Jack Laurie confirmed to the Atchison Globe that authorities had received information that Lee had been seen in the Arrington vicinity.

“We had information of him being in the area but we were unable to locate him,” Laurie said. “We continue to follow up on other leads.”

The KHP helicopter was also summoned to assist in the search, but was unable to fly due to the weather, Laurie said.

At about 1:20 AM on April 22 Laurie announced an inmate of the Atchison County Jail had escaped from custody. Lee, the inmate, of Atchison, was being held for an aggravated robbery which is alleged to have occurred on Dec. 31, 2020. Lee has been in custody since Jan. 8, Laurie wrote in the release.

A preliminary investigation launched after the escape by Sheriff’s administration revealed that several security policies were not followed by jail security staff, which allowed Lee to manipulate a door lock and make his way into an unsecured area of the jail and then outside of the jail. A jail officer chased Lee several blocks from the jail where Lee picked up a 2-by 4-inch piece of lumber and threatened the unarmed jail officer. Law enforcement attempted to set up a perimeter, but could not locate Lee.

Anyone with information regarding the whereabouts of Taggart Lee can call the Atchison County Communications Center anytime day or night at 913-367-4323 or the Sheriff’s Office at 913-804 6080; or in the event of an emergency call 911.

The termination of Lee Supple, USD 409 math teacher became official at the close of a special Board of Education meeting Tuesday morning.

After the public meeting resumed, board members present unanimously by a 6-0 vote adopted and signed off on Resolution 21-06 to terminate Supple on April 20 with payment of the remainder of his 2020-2021contract because of Supple’s actions contrary to USD 409 Board Policy IA. Board Member Sally Berger was absent from the meeting.

The Board’s Clerk is to present Supple a signed copy of the Resolution in person or by restricted mail. Supple was not present Tuesday’s meeting.

Supple confirmed in an email to the Globe that he had met with district officials during the week previous to the special Board meeting.

The District’s Policy: IA centers on the philosophy of the District’s Mission Statement states that “The mission of the Atchison Public School District shall be to identify and remove all barriers to promote equal opportunities for success by all students.” The Mission Statement was initially adopted Oct. 6, 2008, and last reaffirmed Feb. 8, 2021.

“It does feel better to know that the claims of unprofessional behavior were removed,” Supple said. “I expressed to the district that the facts would be on my side during a potential hearing so I feel that they must have acknowledged that by passing the resolution yesterday (Tuesday, April 20) morning.

“The previous claims weren’t true a month ago, nor are they true today,” Supple continued. My plan was already to resign at the end of the year so I was content in leaving a violation of the mission statement in order to reach an agreement.”

It was the March 8 meeting when the 409 Board members adopted by action Resolution No.21-04 to notify Supple of the Board’s intent to terminate his contract with pay and that he was entitled to a hearing within 10 days. Resolution 21-06 states Supple requested a hearing, but then subsequently withdrew his request in exchange for termination of the contract as a result of Policy IA.

Supple had been employed with the District since Aug. 8, 2006, according to Resolution No. 21-04 adopted in March. In addition to the current termination agreement, the initial intent of Board members also alleged violations of Policy; GAF and Policy GBU.

“My family has a long history of teaching in the community,” Supple said, “which is sad to come to an end this way. However, I will cherish the time I spent here and hope I had an impact on the students I taught and coached over the past 15 years.”

According to usd409.net Directory posted on Atchison Public Schools homepage indicates Supple had most recently served as an Atchison High School math teacher.