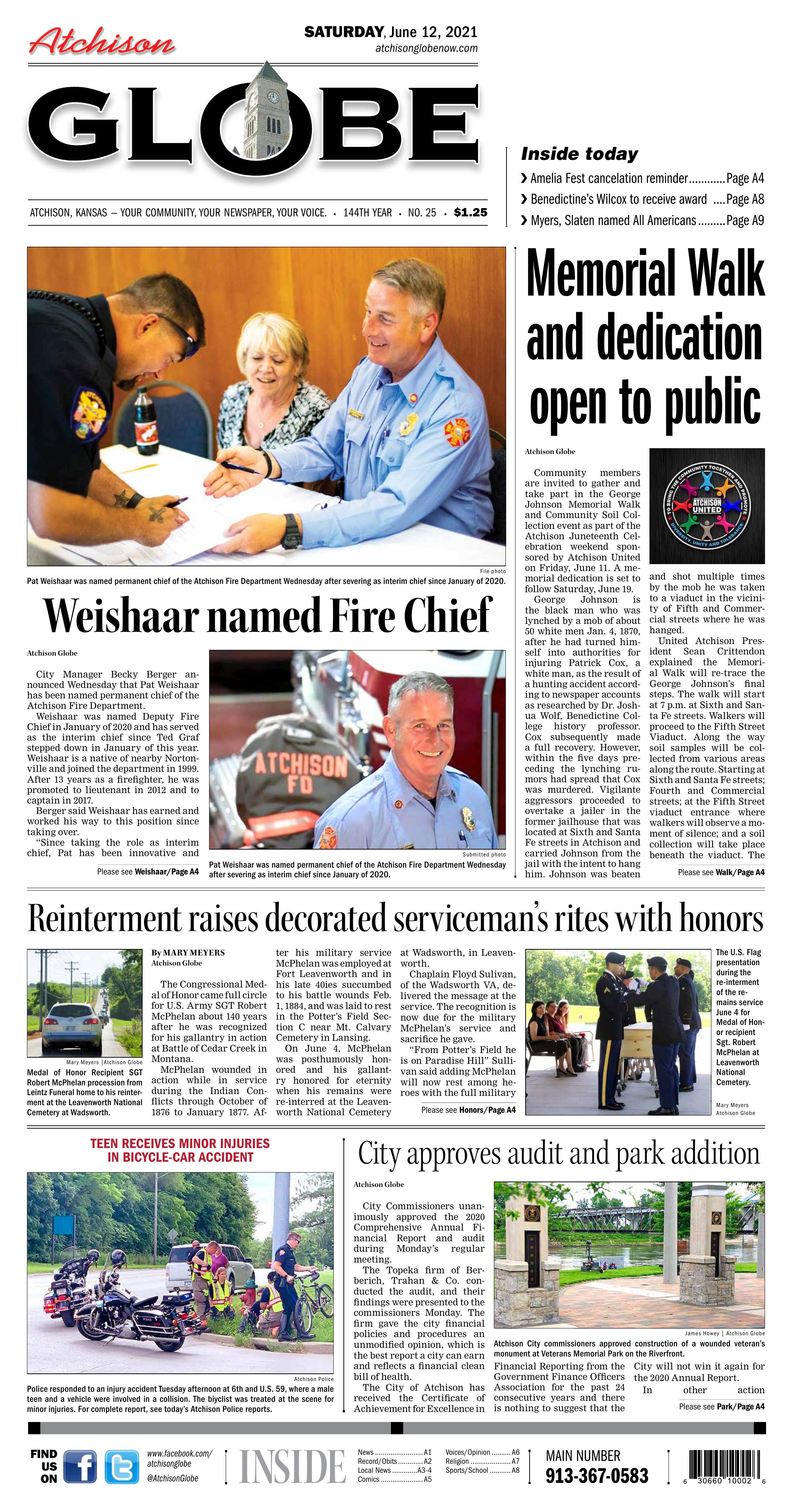 Weishaar was named Deputy Fire Chief in January of 2020 and has served as the interim chief since Ted Graf stepped down in January of this year. Weishaar is a native of nearby Nortonville and joined the department in 1999. After 13 years as a firefighter, he was promoted to lieutenant in 2012 and to captain in 2017.

Berger said Weishaar has earned and worked his way to this position since taking over.

“Since taking the role as interim chief, Pat has been innovative and stepped up to lead the department in an efficient and effective way,” Berger said. “He has earned the right to remove the interim tag from his job title.”

Weishaar has several fire department-related technical and administrative certifications and has been the department’s code enforcement officer since 2014. He manages the lighting system for the Amelia Earhart Memorial Bridge, serves on several boards and committees within the community and was recently named the city’s Administrative Hearings Officer.

Weishaar began his professional career in Atchison, working for Litwin’s clothing store, while attending college. Before joining the department, Weishaar worked as an administrator for the

Jones Store Company in Kansas City and Topeka before moving to Atchison in the mid 1990’s to raise his family. Prior to working for the AFD, Pat worked locally for Blish-Mize.

“I’m excited to serve in this new role. I have had many great mentors throughout my career with the department and have established many positive relationships working in community,” Weishaar said. “I’m proud to serve our citizens and continue the exceptional reputation and legacy of the Atchison Fire Department.”

The U.S. Flag presentation during the re-interment of the remains service June 4 for Medal of Honor recipient Sgt. Robert McPhelan at Leavenworth National Cemetery.

Many people lined the streets along the funeral procession showing patriotism to honor 1877 Medal of Honor Recipient SGT Robert McPhelan June 4 in Leavenworth.

Medal of Honor Recipient SGT Robert McPhelan procession from Leintz Funeral home to his reinterment at the Leavenworth National Cemetery at Wadsworth.

The Congressional Medal of Honor came full circle for U.S. Army SGT Robert McPhelan about 140 years after he was recognized for his gallantry in action at Battle of Cedar Creek in Montana.

McPhelan wounded in action while in service during the Indian Conflicts through October of 1876 to January 1877. After his military service McPhelan was employed at Fort Leavenworth and in his late 40ies succumbed to his battle wounds Feb. 1, 1884, and was laid to rest in the Potter’s Field Section C near Mt. Calvary Cemetery in Lansing.

On June 4, McPhelan was posthumously honored and his gallantry honored for eternity when his remains were re-interred at the Leavenworth National Cemetery at Wadsworth, in Leavenworth.

Chaplain Floyd Sulivan, of the Wadsworth VA, delivered the message at the service. The recognition is now due for the military McPhelan’s service and sacrifice he gave.

“From Potter’s Field he is on Paradise Hill” Sullivan said adding McPhelan will now rest among heroes with the full military honors due to him.

Col. Roger, Donlon, retired, a Medeal of Honor Recipent, was also present. Col. Donlon was the first to receive the Medal of Honor distinction from the Vietnam War.

The family members agreed they were overwhelmed with emotion to see patriots line the route as the funeral procession escorted by VFW Post 56, KS Patriot Guard, ALR Post 370, ALR Post 19 traveled from the Leintz Funeral Home to their ancestor’s final resting place. Veterans of military service, state and local dignitaries Wreaths Across America, DAR and Medal of Honor Historical Society representatives comprised the funeral entourage. The reinterment was made possible through the efforts of the organizations’ volunteer efforts.

Rogers estimated it was within the past 10 years when they became aware of their ancestor and his lifetime even though his Medal of Honor has been lost through history.

McPhelan was born 1837 in Laois, Ireland. He immigrated to the United States with his wife Mary and joined the U.S. Army. McPhelan served with Company E, 5th U.S. Infantry serving with Col. Nelson Miles. He was engaged in the Indian Conflicts that included the Battle of Cedar Creek, which marked the surrender of Sitting Bull. General William T. Sherman presented McPhelan his Medal of Honor on July 18, 1877.

Within the past several years, volunteers of the historic military groups became aware of McPhelan and managed to locate his remains. The Leavenworth Chapter of the DAR paid respect to MCPhelan and his distinguished honor at his grave in Potter’s Field. His ancestors were present for the service. Rogers said it was at that time she commented that she wanted her great grandfather to have a more suitable eternal resting place. It was also later learned that McPhelan’s widow was laid to rest in St. Joseph, Missouri.

The Topeka firm of Berberich, Trahan & Co. conducted the audit, and their findings were presented to the commissioners Monday. The firm gave the city financial policies and procedures an unmodified opinion, which is the best report a city can earn and reflects a financial clean bill of health.

The City of Atchison has received the Certificate of Achievement for Excellence in Financial Reporting from the Government Finance Officers Association for the past 24 consecutive years and there is nothing to suggest that the City will not win it again for the 2020 Annual Report.

In other action Commissioners adopted an ordinance that sets policy for mobile food vendors, opening the door to potential food trucks in Atchison in the future.

Commissioners also approved receipt of a donation that could lead to the construction of a wounded veteran’s monument at Veterans Memorial Park on the Riverfront.

Commissioners also voted to remove the prohibition of operating motor vehicles and other wheeled apparatus in the 500-600 blocks of Commercial Street. The prohibition existed due to the pedestrian mall that has been removed as part of the Commercial Street Revitalization Project that is scheduled for completion in July.

Following the meeting commissioners also participated in workshops regarding the CSO Long Term Control Plan and an existing resolution that outlines funding that the City gives Atchison County to help cover expenses for Solid Waste and Joint Communications.

The next regular city commission meeting is scheduled for 4:30 p.m. on Monday, June 21 in the commission room. 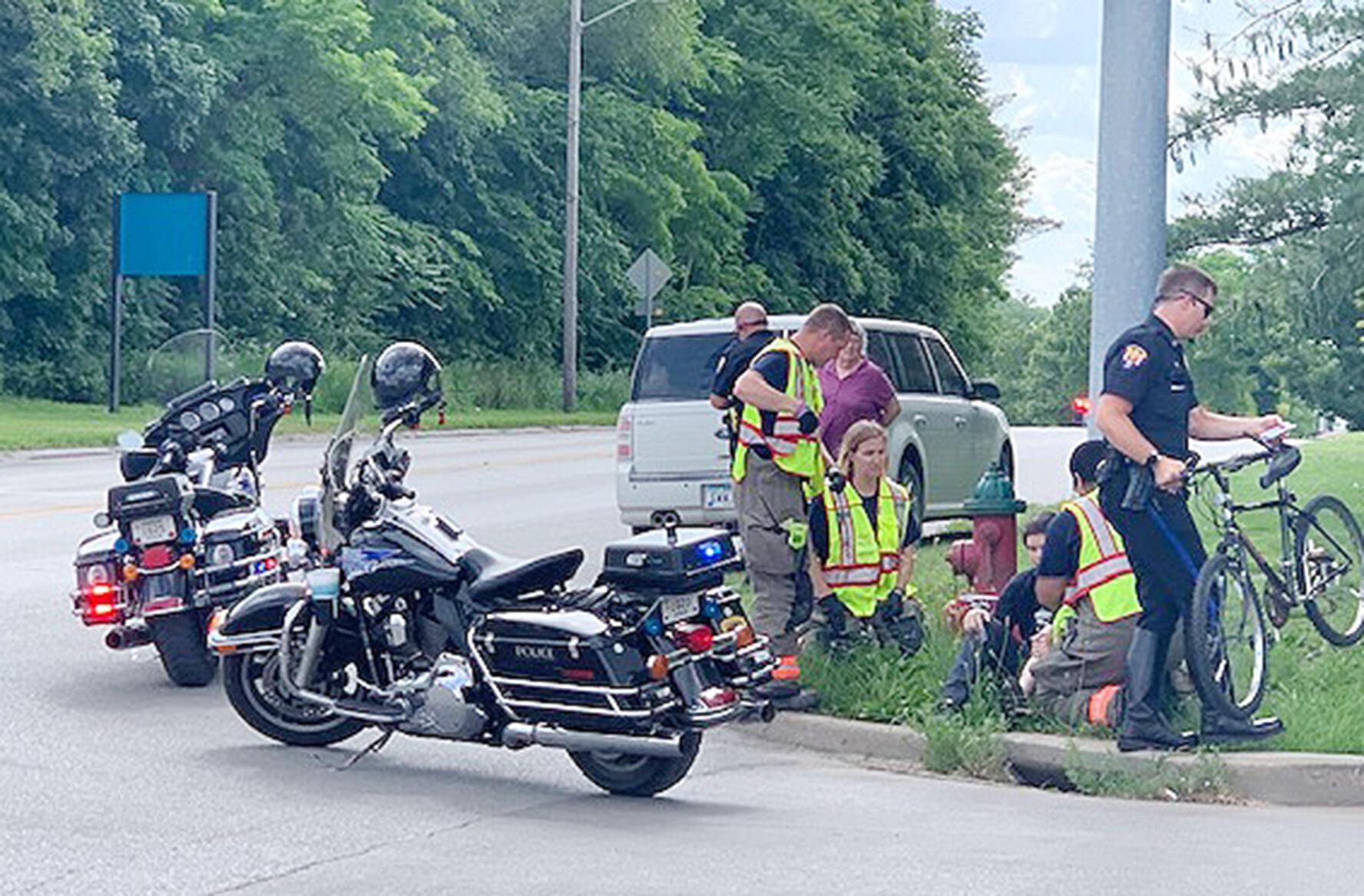 Police responded to an injury accident Tuesday afternoon at 6th and U.S. 59, where a male teen and a vehicle were involved in a collision. The biyclist was treated at the scene for minor injuries. For complete report, see today’s Atchison Police reports.

Community members are invited to gather and take part in the George Johnson Memorial Walk and Community Soil Collection event as part of the Atchison Juneteenth Celebration weekend sponsored by Atchison United on Friday, June 11. A memorial dedication is set to follow Saturday, June 19.

George Johnson is the black man who was lynched by a mob of about 50 white men Jan. 4, 1870, after he had turned himself into authorities for injuring Patrick Cox, a white man, as the result of a hunting accident according to newspaper accounts as researched by Dr. Joshua Wolf, Benedictine College history professor. Cox subsequently made a full recovery. However, within the five days preceding the lynching rumors had spread that Cox was murdered. Vigilante aggressors proceeded to overtake a jailer in the former jailhouse that was located at Sixth and Santa Fe streets in Atchison and carried Johnson from the jail with the intent to hang him. Johnson was beaten and shot multiple times by the mob he was taken to a viaduct in the vicinity of Fifth and Commercial streets where he was hanged.

United Atchison President Sean Crittendon explained the Memorial Walk will re-trace the George Johnson’s final steps. The walk will start at 7 p.m. at Sixth and Santa Fe streets. Walkers will proceed to the Fifth Street Viaduct. Along the way soil samples will be collected from various areas along the route. Starting at Sixth and Santa Fe streets; Fourth and Commercial streets; at the Fifth Street viaduct entrance where walkers will observe a moment of silence; and a soil collection will take place beneath the viaduct. The collected soil is destined for delivery to the Equal Justice Initiative Museum and Legacy Museum located in Montgomery, Alabama. At the viaduct local leaders will present readings and the group will pray for social justice.

The public is also invited to attend a historical marker memorial dedication will take place the following weekend at 7 p.m. Saturday, June 19 at the art square located near the viaduct in near the 400 and 500 blocks of Commercial Street hosted by Atchison United and the Atchison Art Association.

For more information about the walk, memorial dedication and the GeorgeJohnsonRemembrance Project check out the Atchison United, and Atchison Juneteenth and #georgejohnsonrembranceproject on Facebook.