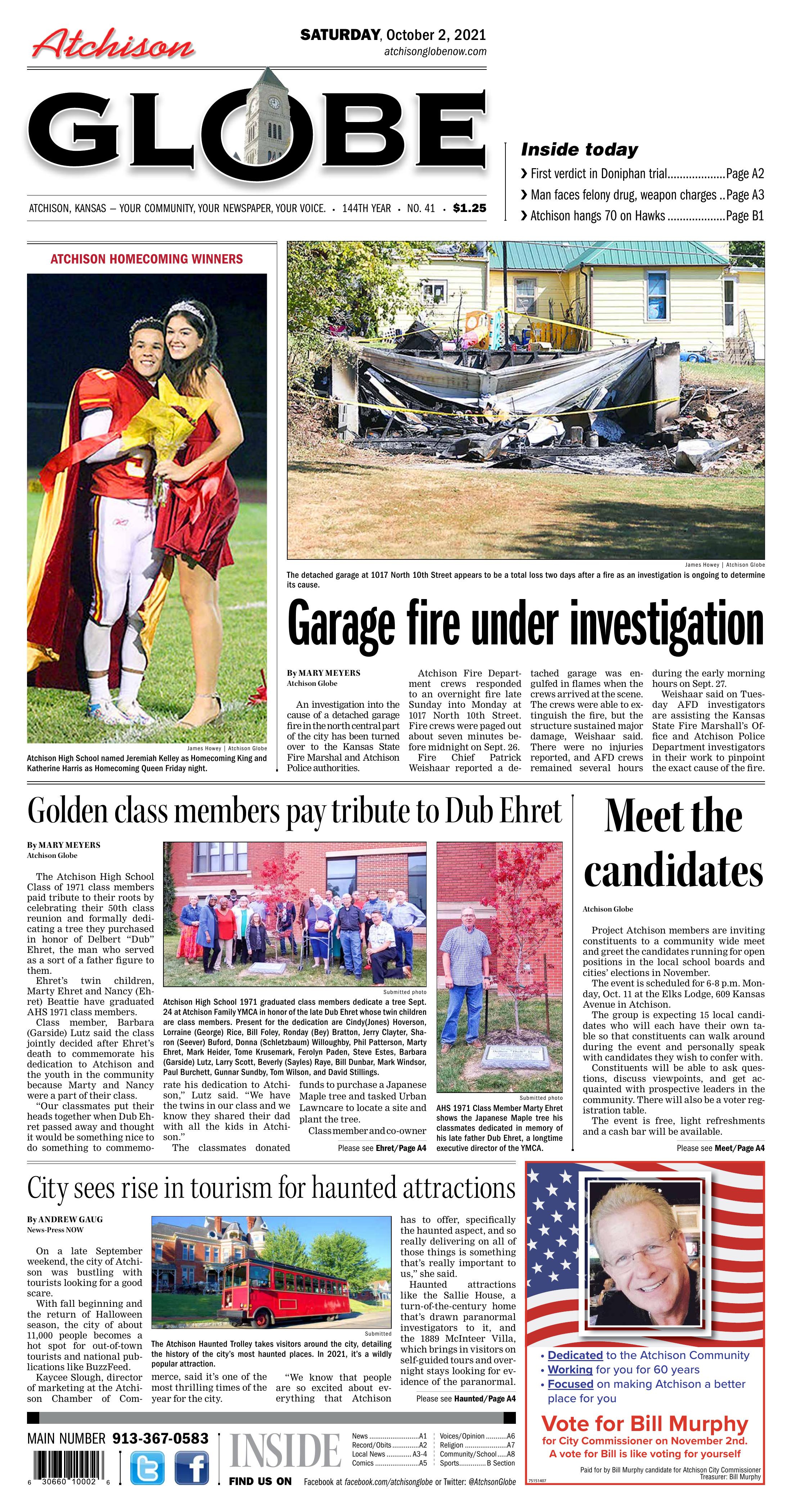 The detached garage at 1017 North 10th Street appears to be a total loss two days after a fire as an investigation is ongoing to determine its cause. 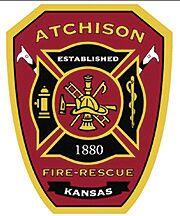 An investigation into the cause of a detached garage fire in the north central part of the city has been turned over to the Kansas State Fire Marshal and Atchison Police authorities.

Atchison Fire Department crews responded to an overnight fire late Sunday into Monday at 1017 North 10th Street. Fire crews were paged out about seven minutes before midnight on Sept. 26.

Fire Chief Patrick Weishaar reported a detached garage was engulfed in flames when the crews arrived at the scene. The crews were able to extinguish the fire, but the structure sustained major damage, Weishaar said. There were no injuries reported, and AFD crews remained several hours during the early morning hours on Sept. 27.

Weishaar said on Tuesday AFD investigators are assisting the Kansas State Fire Marshall’s Office and Atchison Police Department investigators in their work to pinpoint the exact cause of the fire.

The Atchison High School Class of 1971 class members paid tribute to their roots by celebrating their 50th class reunion and formally dedicating a tree they purchased in honor of Delbert “Dub” Ehret, the man who served as a sort of a father figure to them.

Class member, Barbara (Garside) Lutz said the class jointly decided after Ehret’s death to commemorate his dedication to Atchison and the youth in the community because Marty and Nancy were a part of their class.

“Our classmates put their heads together when Dub Ehret passed away and thought it would be something nice to do something to commemorate his dedication to Atchison,” Lutz said. “We have the twins in our class and we know they shared their dad with all the kids in Atchison.”

The classmates donated funds to purchase a Japanese Maple tree and tasked Urban Lawncare to locate a site and plant the tree.

Class member and co-owner of Byrd Memorial, Paul Burchett crafted and set the stone in memory of Ehret’s “life of dedication and service for others to inspire greatness.” The stone also commemorates Ehret’s 39-year tenure as the Atchison Family YMCA for an executive director that ended in 1988.

The initial plan was to dedicate the tree sooner, but the COVID pandemic interruption delayed the official dedication, Lutz said.

The tree is located toward the southwest corner of the Atchison Family YMCA Cray Community Center along the 300 block of Commercial Street. Following an extensive renovation and expansion, the current Y opened in 2017.

The Class of 1971 formally dedicated the tree and stone Friday, Sept. 24 at the Y.

Not all of the class members present for the 50th Class Reunion attended the dedication, Lutz said.

Project Atchison members are inviting constituents to a community wide meet and greet the candidates running for open positions in the local school boards and cities’ elections in November.

The group is expecting 15 local candidates who will each have their own table so that constituents can walk around during the event and personally speak with candidates they wish to confer with.

Constituents will be able to ask questions, discuss viewpoints, and get acquainted with prospective leaders in the community. There will also be a voter registration table.

The event is free, light refreshments and a cash bar will be available.

As of late September, 15 candidates indicated their intent to be present to meet with the public.

USD 377 Board of Education candidate, Trenton Beagle who is running for Position No. 5 to represent Walnut, Mt. Pleasant, and Center townships and a contiguous portion of the district in Jefferson County.

Mayor City of Huron, Incumbent Jaquetta Peak is seeking another term to serve as the mayor of Huron.

Project Atchison is a grassroots organization committed to improving the quality of life in the community. Engagement in local government is key to the success of our community’s future and our goal is to help empower citizens to get involved.

The Atchison Haunted Trolley takes visitors around the city, detailing the history of the city’s most haunted places. In 2021, it’s a wildly popular attraction.

On a late September weekend, the city of Atchison was bustling with tourists looking for a good scare.

With fall beginning and the return of Halloween season, the city of about 11,000 people becomes a hot spot for out-of-town tourists and national publications like BuzzFeed.

Kaycee Slough, director of marketing at the Atchison Chamber of Commerce, said it’s one of the most thrilling times of the year for the city.

“We know that people are so excited about everything that Atchison has to offer, specifically the haunted aspect, and so really delivering on all of those things is something that’s really important to us,” she said.

Haunted attractions like the Sallie House, a turn-of-the-century home that’s drawn paranormal investigators to it, and the 1889 McInteer Villa, which brings in visitors on self-guided tours and overnight stays looking for evidence of the paranormal. Each year, Slough said, it seems like their popularity grows.

“We try to ask (visitors), ‘How did you even find out about the Sallie House?’ and they’re like, ‘Oh, we saw a documentary,’ or ‘We’ve seen it on BuzzFeed before.’ So that’s kind of a common thing that people say, and it really is cool that it brings people from all over,” she said.

As a new Atchison resident, Slough said she wasn’t well-versed on the city’s spooky past and the popularity of its attractions with thrill-seekers. After taking a trip to the Sallie House, she said she understands the hype.

“My first time going into the Sallie House was like my first week of work. I’ll be totally honest with you, I was in and then I was right back out because it kind of gives you the heebie-jeebies,” she said.

As the popularity of the spookiest season of the year grows in Atchison, the city has capitalized on the attention. This year, it’s rolling out its first Haunted Weekend in Atchison from Sept. 24 to 26. Featuring oddities, expos, “Shocktail” parties and Haunted Trolley rides, the three-day event was a sell-out success.

“We know there’s a desire for it, and so we’re already thinking about (next year),” Slough said.

In the meantime, the city is figuring out how to make more room for its Haunted Trolley Rides, which take people on a detailed trip through the city and its history. By mid-September, the tours had completely sold out for October. Slough said there is a hope to carve out more time before the season ends.

“We’re getting ready to add more just because people are so excited to spend the day in Atchison and take part in all of the haunted festivities that we have,” she said.

The Chamber of Commerce is hoping the rising tide of spooky attractions also raises non-haunted businesses like restaurants and shops in the area. When staff members talk to visitors, they encourage people to visit and take in other aspects of the city before they leave.

“We always recommend going to a great local restaurant here in town or visiting the Amelia Earhart Birthplace Museum or all the other kind of rich architecture that we have here in Atchison,” Slough said.