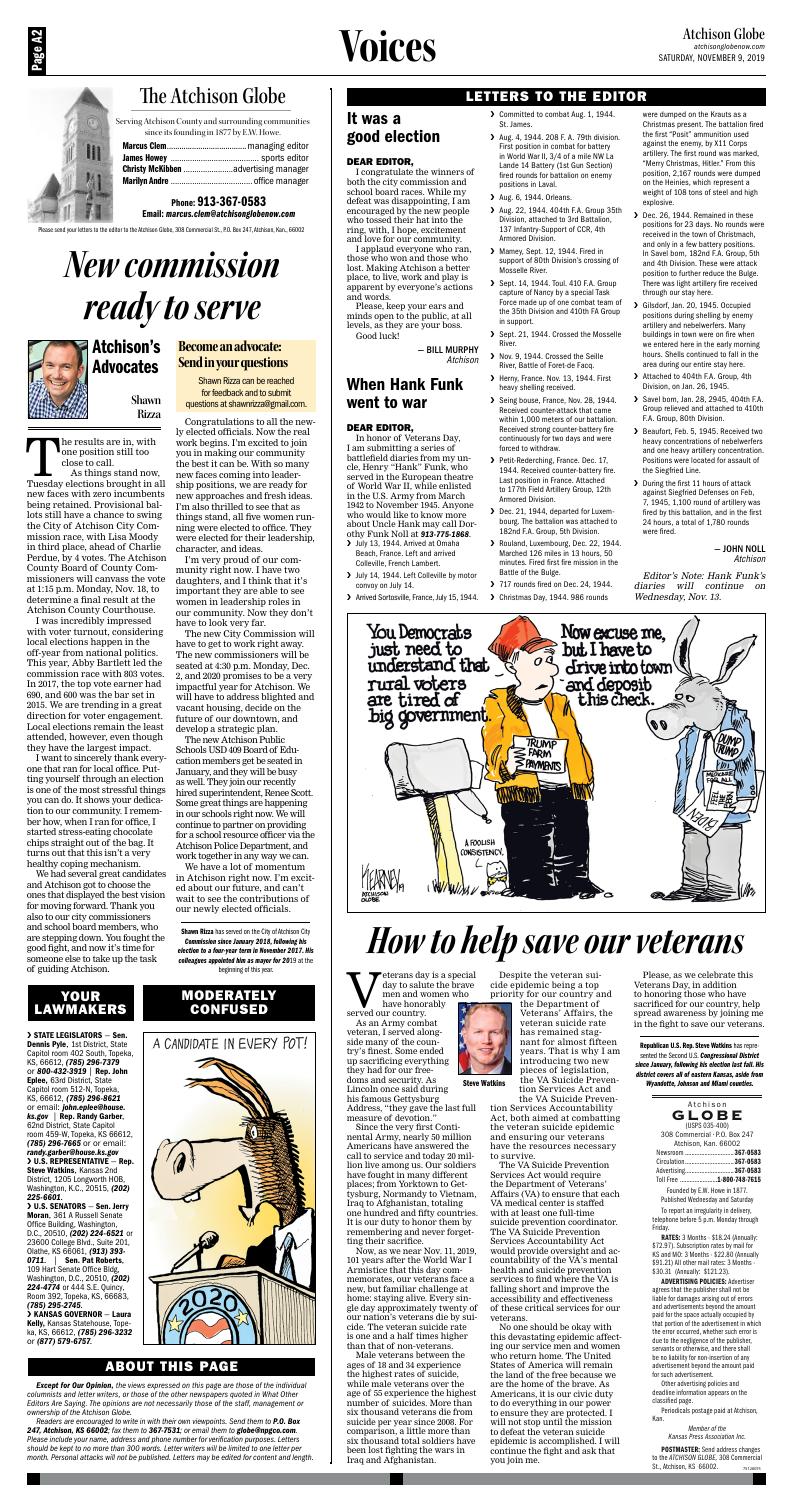 I congratulate the winners of both the city commission and school board races. While my defeat was disappointing, I am encouraged by the new people who tossed their hat into the ring, with, I hope, excitement and love for our community.

I applaud everyone who ran, those who won and those who lost. Making Atchison a better place, to live, work and play is apparent by everyone’s actions and words.

Please, keep your ears and minds open to the public, at all levels, as they are your boss.

When Hank Funk went to war

In honor of Veterans Day, I am submitting a series of battlefield diaries from my uncle, Henry “Hank” Funk, who served in the European theatre of World War II, while enlisted in the U.S. Army from March 1942 to November 1945. Anyone who would like to know more about Uncle Hank may call Dorothy Funk Noll at 913-775-1868.

Seing bouse, France, Nov. 28, 1944. Received counter-attack that came within 1,000 meters of our battalion. Received strong counter-battery fire continuously for two days and were forced to withdraw.

Dec. 26, 1944. Remained in these positions for 23 days. No rounds were received in the town of Christmach, and only in a few battery positions. In Savel born, 182nd F.A. Group, 5th and 4th Division. These were attack position to further reduce the Bulge. There was light artillery fire received through our stay here.

Gilsdorf, Jan. 20, 1945. Occupied positions during shelling by enemy artillery and nebelwerfers. Many buildings in town were on fire when we entered here in the early morning hours. Shells continued to fall in the area during our entire stay here.

Beaufort, Feb. 5, 1945. Received two heavy concentrations of nebelwerfers and one heavy artillery concentration. Positions were located for assault of the Siegfried Line. 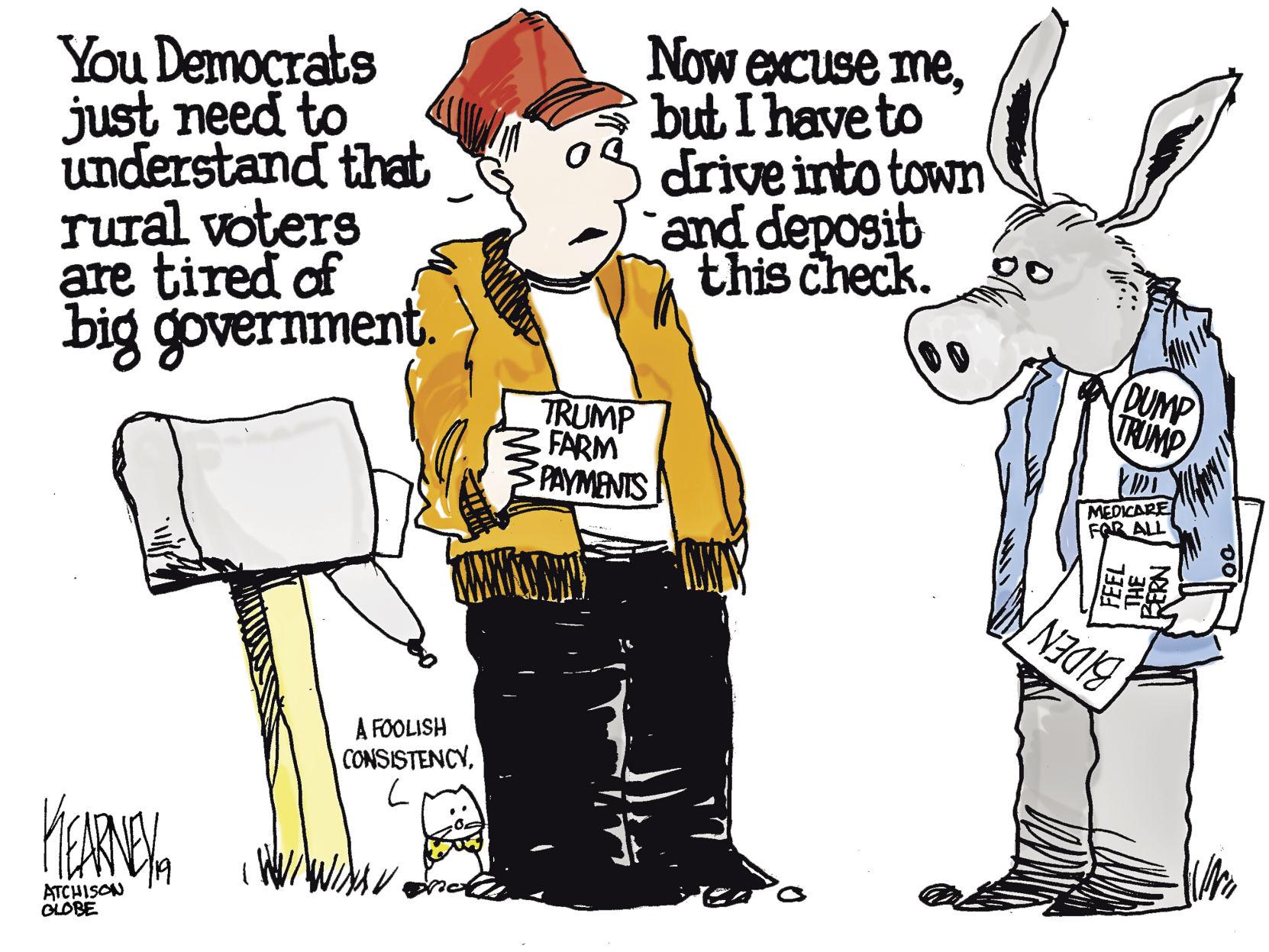 Veterans day is a special day to salute the brave men and women who have honorably served our country.

As an Army combat veteran, I served alongside many of the country’s finest. Some ended up sacrificing everything they had for our freedoms and security. As Lincoln once said during his famous Gettysburg Address, “they gave the last full measure of devotion.”

Since the very first Continental Army, nearly 50 million Americans have answered the call to service and today 20 million live among us. Our soldiers have fought in many different places; from Yorktown to Gettysburg, Normandy to Vietnam, Iraq to Afghanistan, totaling one hundred and fifty countries. It is our duty to honor them by remembering and never forgetting their sacrifice.

Now, as we near Nov. 11, 2019, 101 years after the World War I Armistice that this day commemorates, our veterans face a new, but familiar challenge at home: staying alive. Every single day approximately twenty of our nation’s veterans die by suicide. The veteran suicide rate is one and a half times higher than that of non-veterans.

The VA Suicide Prevention Services Act would require the Department of Veterans’ Affairs (VA) to ensure that each VA medical center is staffed with at least one full-time suicide prevention coordinator. The VA Suicide Prevention Services Accountability Act would provide oversight and accountability of the VA’s mental health and suicide prevention services to find where the VA is falling short and improve the accessibility and effectiveness of these critical services for our veterans.

No one should be okay with this devastating epidemic affecting our service men and women who return home. The United States of America will remain the land of the free because we are the home of the brave. As Americans, it is our civic duty to do everything in our power to ensure they are protected. I will not stop until the mission to defeat the veteran suicide epidemic is accomplished. I will continue the fight and ask that you join me.

Please, as we celebrate this Veterans Day, in addition to honoring those who have sacrificed for our country, help spread awareness by joining me in the fight to save our veterans.

The results are in, with one position still too close to call.

As things stand now, Tuesday elections brought in all new faces with zero incumbents being retained. Provisional ballots still have a chance to swing the City of Atchison City Commission race, with Lisa Moody in third place, ahead of Charlie Perdue, by 4 votes. The Atchison County Board of County Commissioners will canvass the vote at 1:15 p.m. Monday, Nov. 18, to determine a final result at the Atchison County Courthouse.

I was incredibly impressed with voter turnout, considering local elections happen in the off-year from national politics. This year, Abby Bartlett led the commission race with 803 votes. In 2017, the top vote earner had 690, and 600 was the bar set in 2015. We are trending in a great direction for voter engagement. Local elections remain the least attended, however, even though they have the largest impact.

I want to sincerely thank everyone that ran for local office. Putting yourself through an election is one of the most stressful things you can do. It shows your dedication to our community. I remember how, when I ran for office, I started stress-eating chocolate chips straight out of the bag. It turns out that this isn’t a very healthy coping mechanism.

We had several great candidates and Atchison got to choose the ones that displayed the best vision for moving forward. Thank you also to our city commissioners and school board members, who are stepping down. You fought the good fight, and now it’s time for someone else to take up the task of guiding Atchison.

Congratulations to all the newly elected officials. Now the real work begins. I’m excited to join you in making our community the best it can be. With so many new faces coming into leadership positions, we are ready for new approaches and fresh ideas. I’m also thrilled to see that as things stand, all five women running were elected to office. They were elected for their leadership, character, and ideas.

I’m very proud of our community right now. I have two daughters, and I think that it’s important they are able to see women in leadership roles in our community. Now they don’t have to look very far.

The new City Commission will have to get to work right away. The new commissioners will be seated at 4:30 p.m. Monday, Dec. 2, and 2020 promises to be a very impactful year for Atchison. We will have to address blighted and vacant housing, decide on the future of our downtown, and develop a strategic plan.

The new Atchison Public Schools USD 409 Board of Education members get be seated in January, and they will be busy as well. They join our recently hired superintendent, Renee Scott. Some great things are happening in our schools right now. We will continue to partner on providing for a school resource officer via the Atchison Police Department, and work together in any way we can.

We have a lot of momentum in Atchison right now. I’m excited about our future, and can’t wait to see the contributions of our newly elected officials.

Related
Become an advocate: Send in your questions
Nov 9, 2019

Become an advocate: Send in your questions

Become an advocate: Send in your questions

Shawn Rizza can be reached

for feedback and to submit 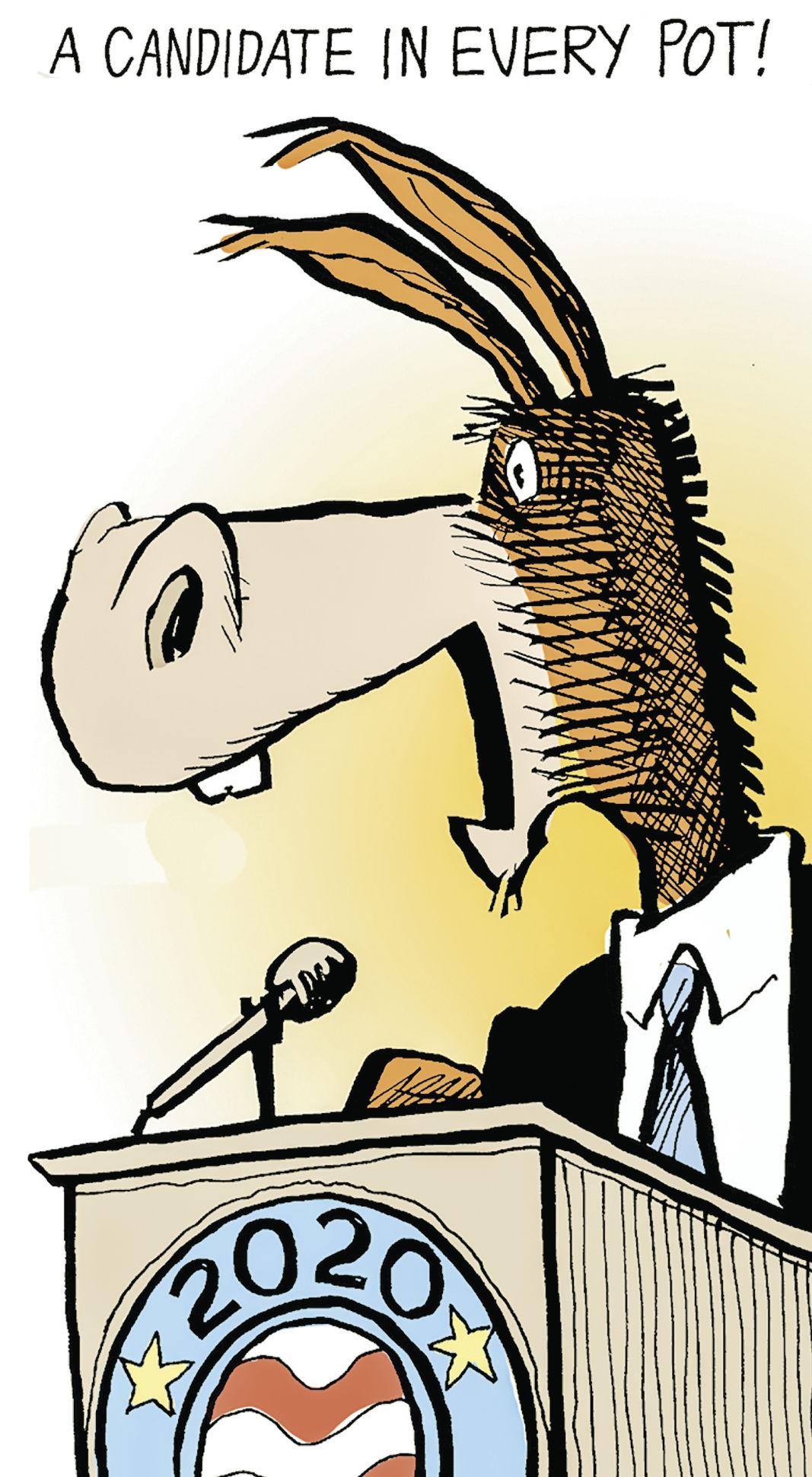 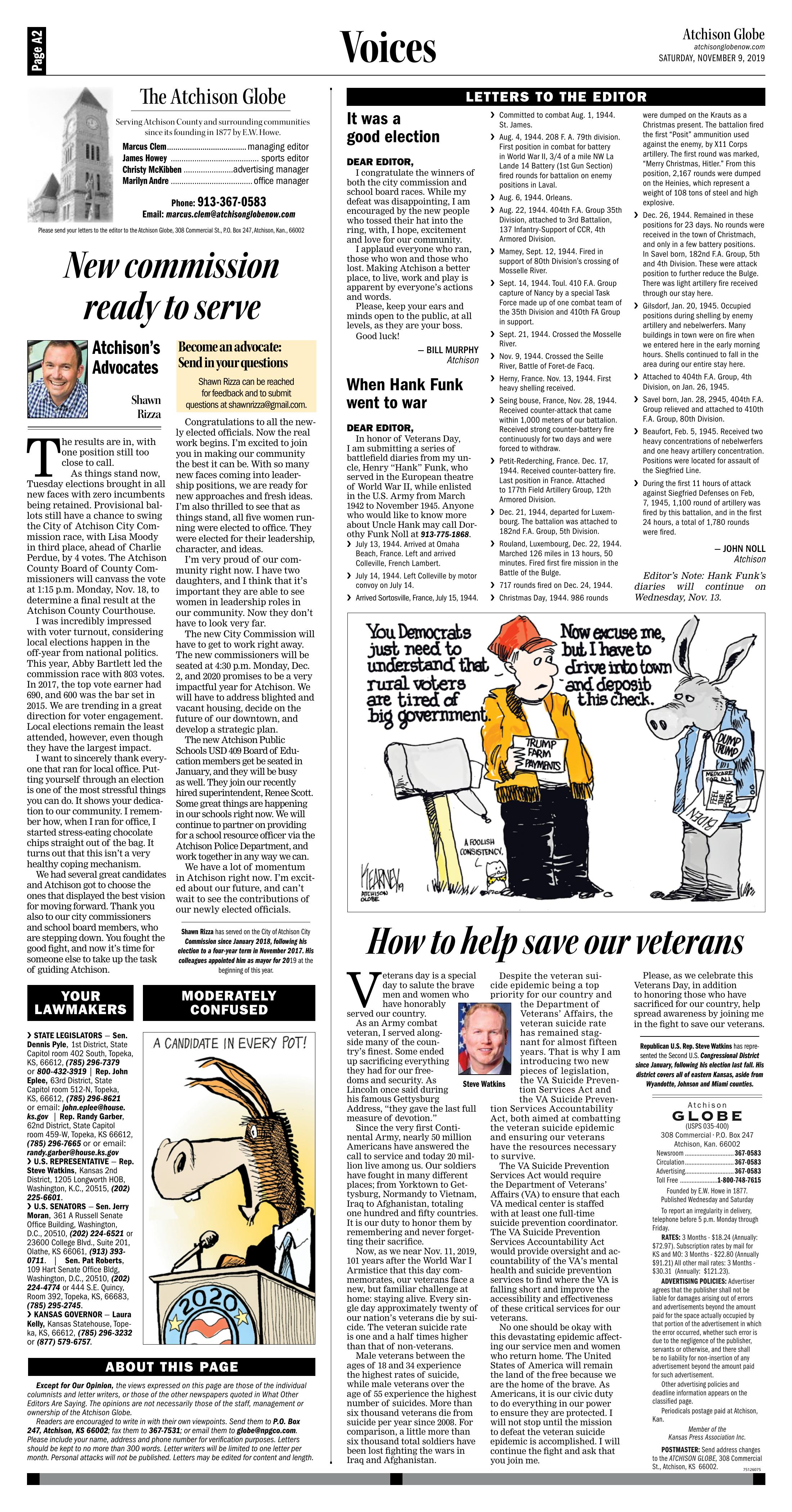