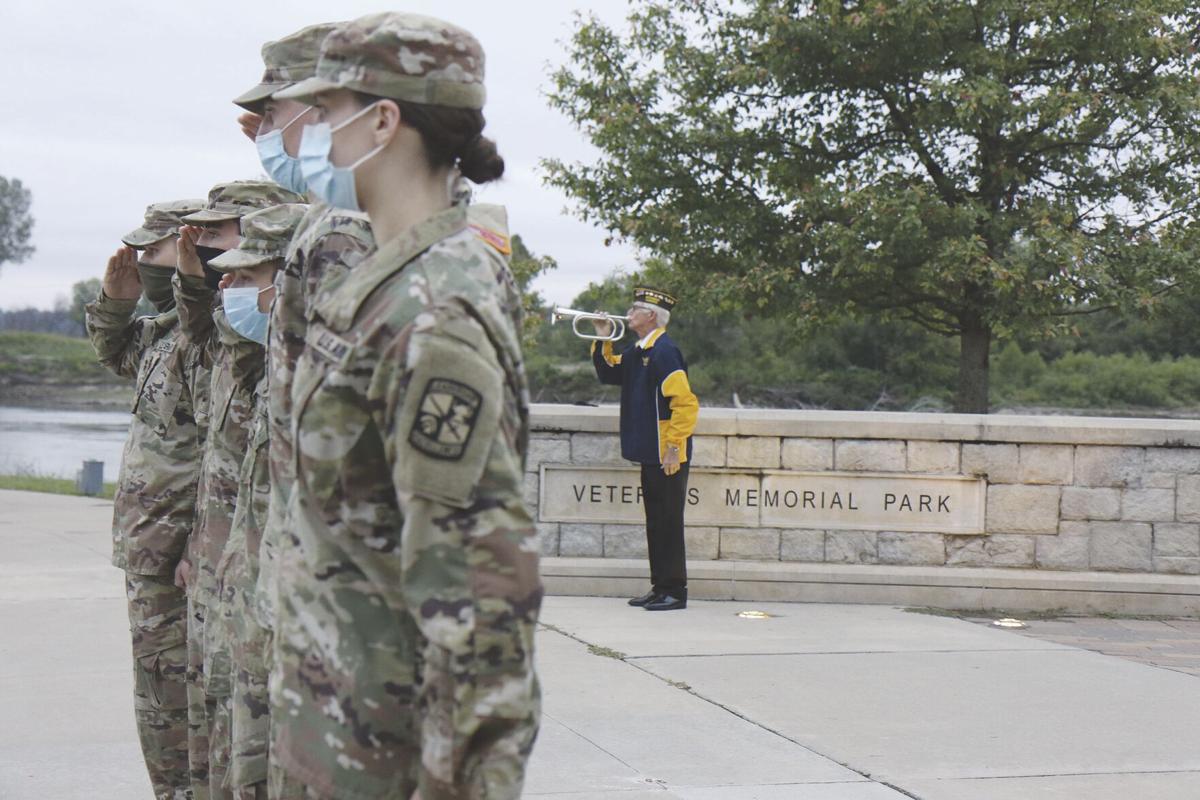 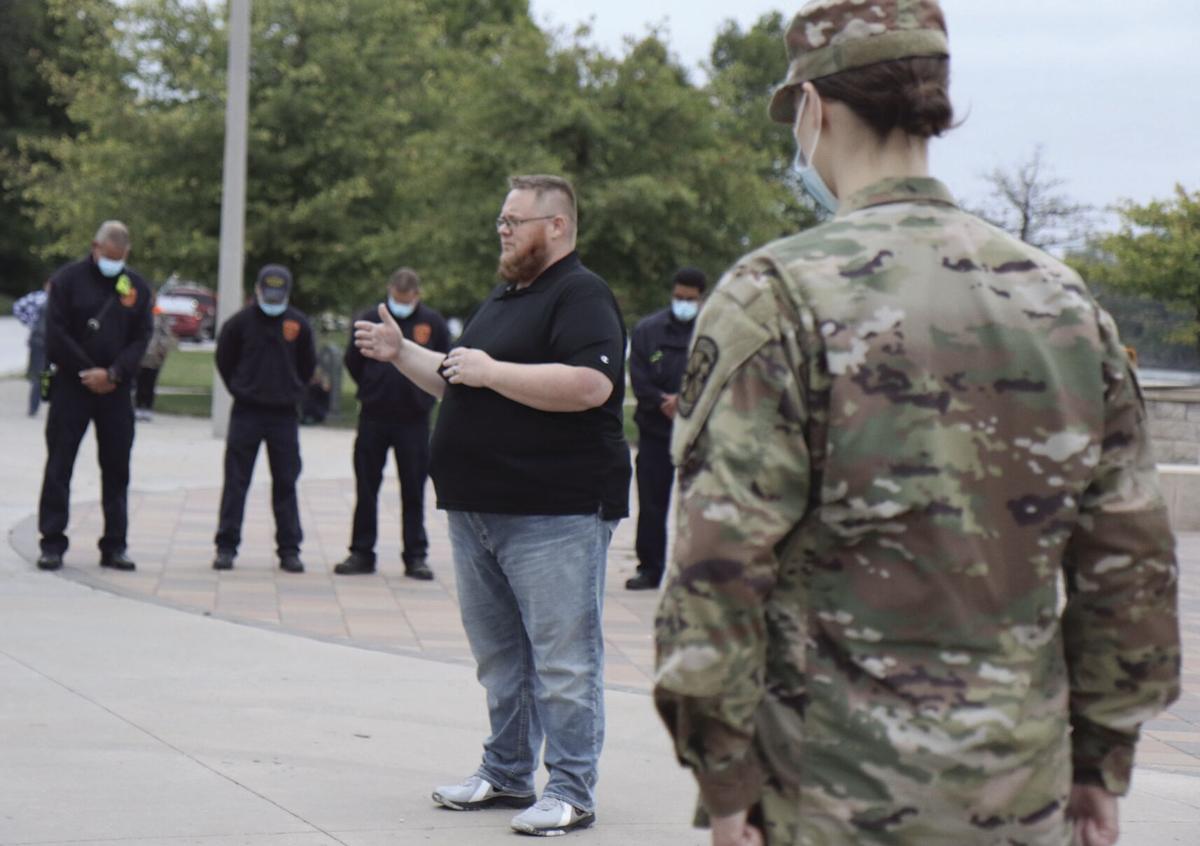 The Rev. Seth Montgomery, center, delivers a blessing and a message of unity Friday during a 9/11 Remembrance Ceremony at Veterans Park along the Riverfront. 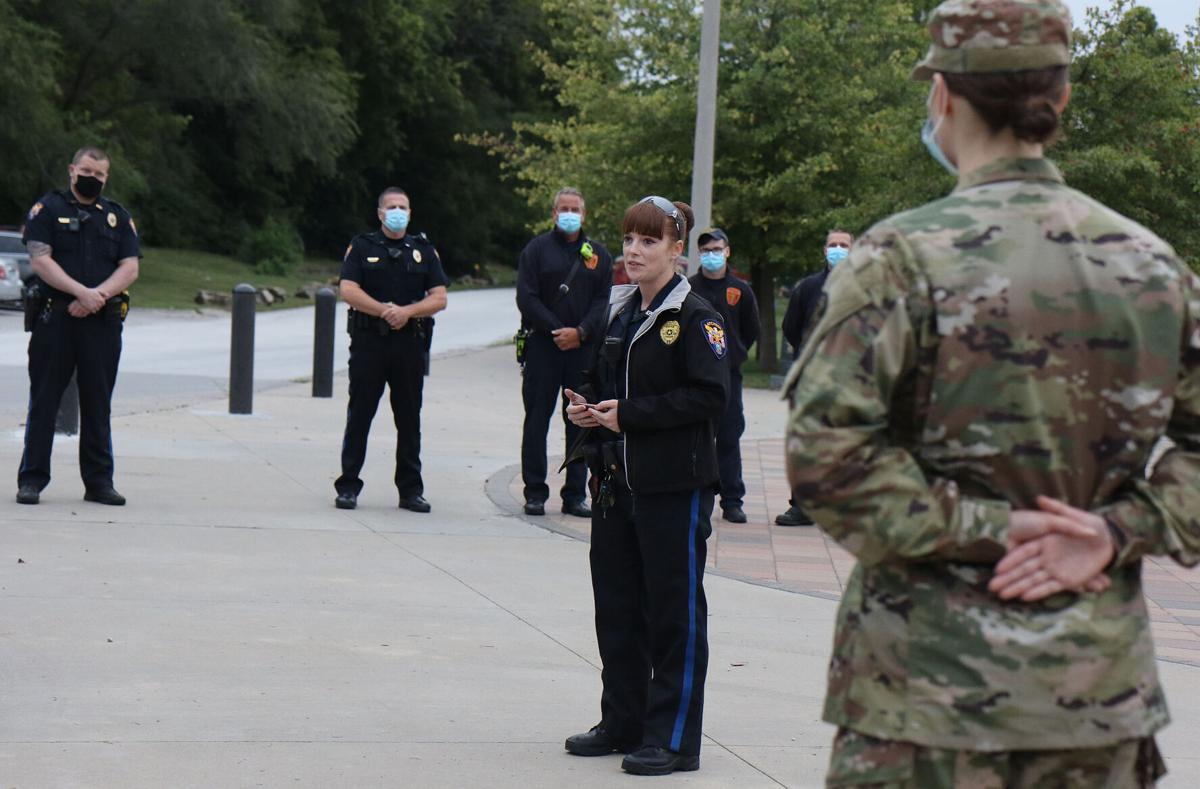 Atchison Police Officer Nichole Maendele, center, shares her journey from 9/11 as Atchison Middle-schooler to post high school military service and deployment to Afghanistan and her subsequent career in law enforcement. 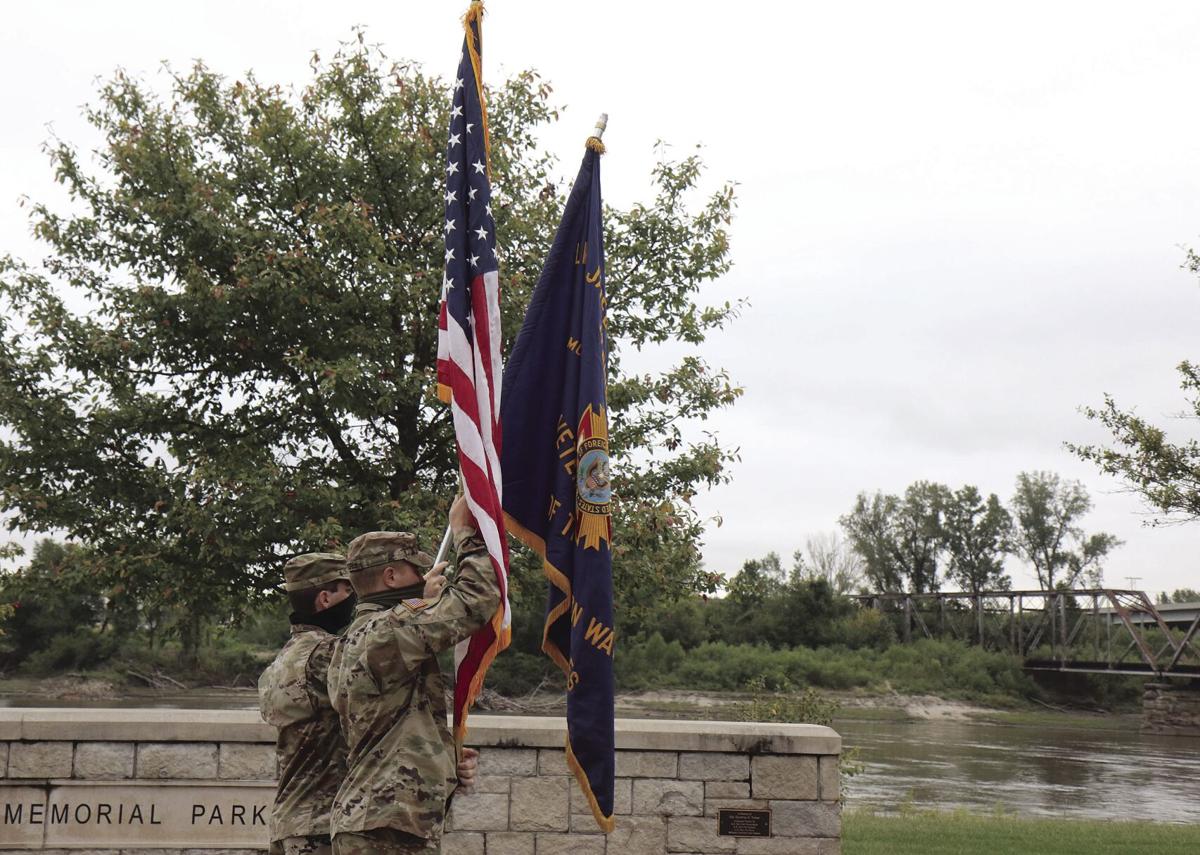 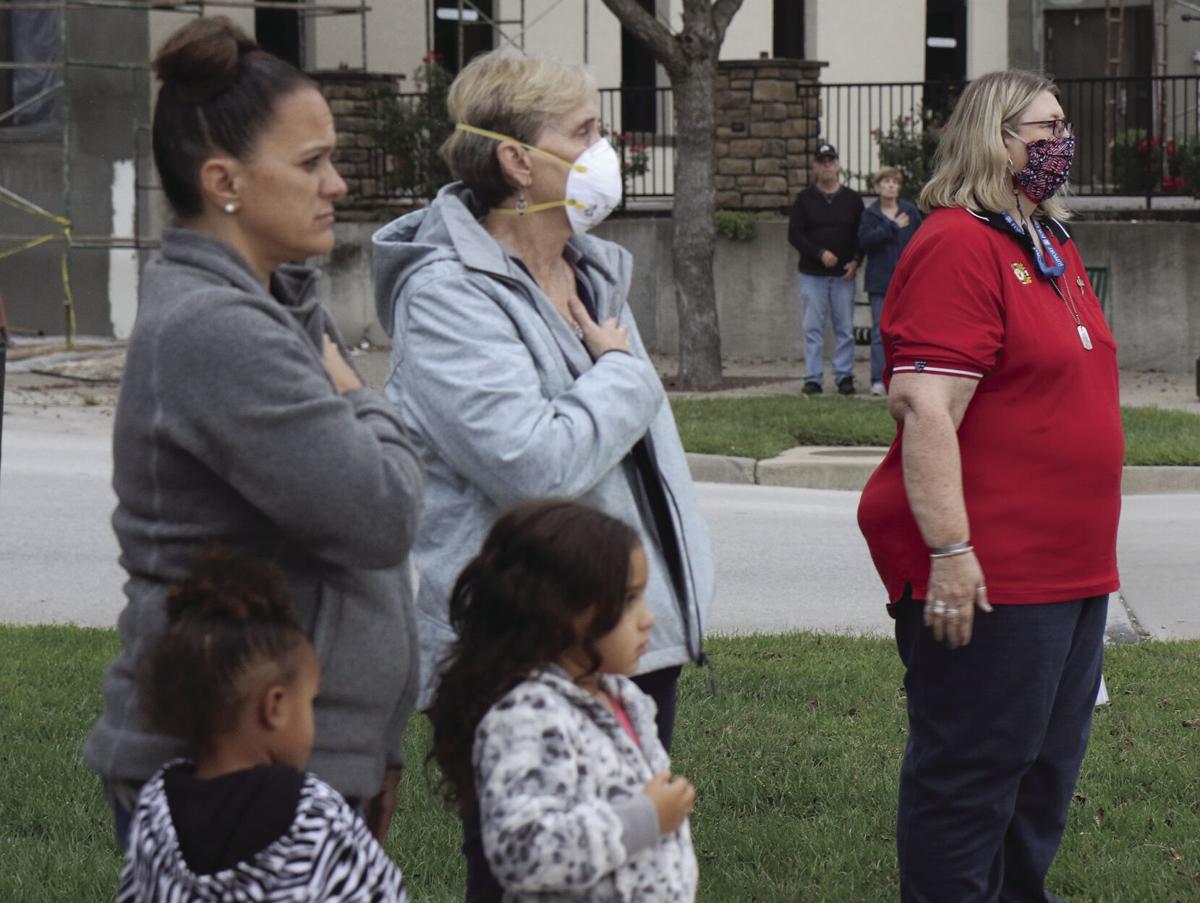 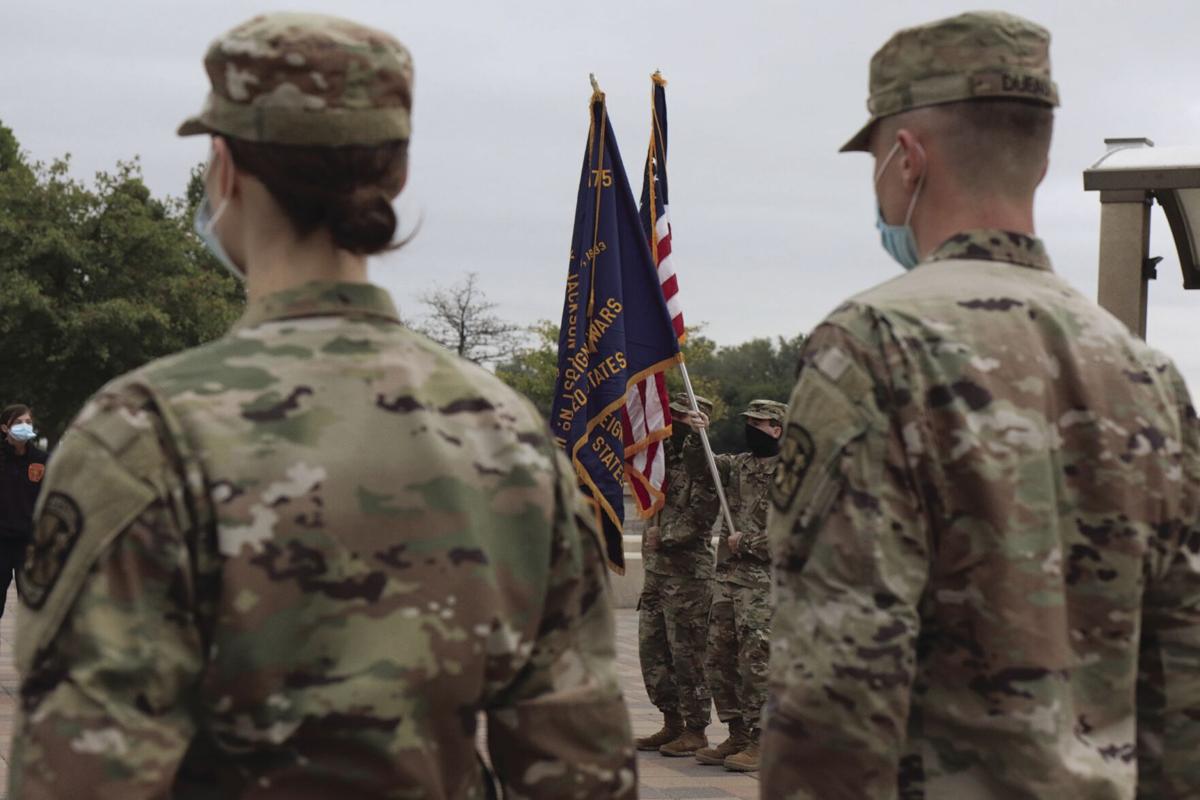 The Rev. Seth Montgomery, center, delivers a blessing and a message of unity Friday during a 9/11 Remembrance Ceremony at Veterans Park along the Riverfront.

Atchison Police Officer Nichole Maendele, center, shares her journey from 9/11 as Atchison Middle-schooler to post high school military service and deployment to Afghanistan and her subsequent career in law enforcement.

Soldiers, veterans, emergency responders and civilian patriots all gathered Friday, 9/11 to remember and pay tribute in wake of the terrorist attacks that united Americans as one.

The event also marked an awareness to observe the month of September as Military Suicide Awareness Month.

Atchison Police Chief Mike Wilson served as master of ceremonies that included a presentation of colors by the ROTC of Benedictine College, and the Pledge of Allegiance.

Officer Nichole Maendele, APD, shared her recollection of Sept. 11, 2001 when she was a student at Atchison Middle School. Maendele recalled the news announced at school, before it became known the nation was under a terrorist attack. After high school Maendele enlisted in the U.S. Army and was deployed to service in Afghanistan.

The Rev. Seth Montgomery offered a blessing and delivered a message inspiring all to put aside differences and come together as one to remember all who have given so freely for our nation.

Auxiliary members passed out fans encouraging all to show emotional support for veterans, and recognize the signs of suicide risk that require immediate attention:

Thinking about hurting or killing yourself.

Looking for ways to kill yourself.

Talking about death, dying or suicide.

Billie Eilish's documentary to be released in February 2021

Call Veterans Crisis Line at 1-800-273-8255 and press 1 if experiencing any of the following warning signs:

Feeling there is no reason to live.

Engaging in risky activities without thinking.

A withdrawal from family and friends.

Mary Meyers can be reached via mary.meyers@atchisong.obenow.com. Follow her on Twitter:@MARYMEYERSglobe