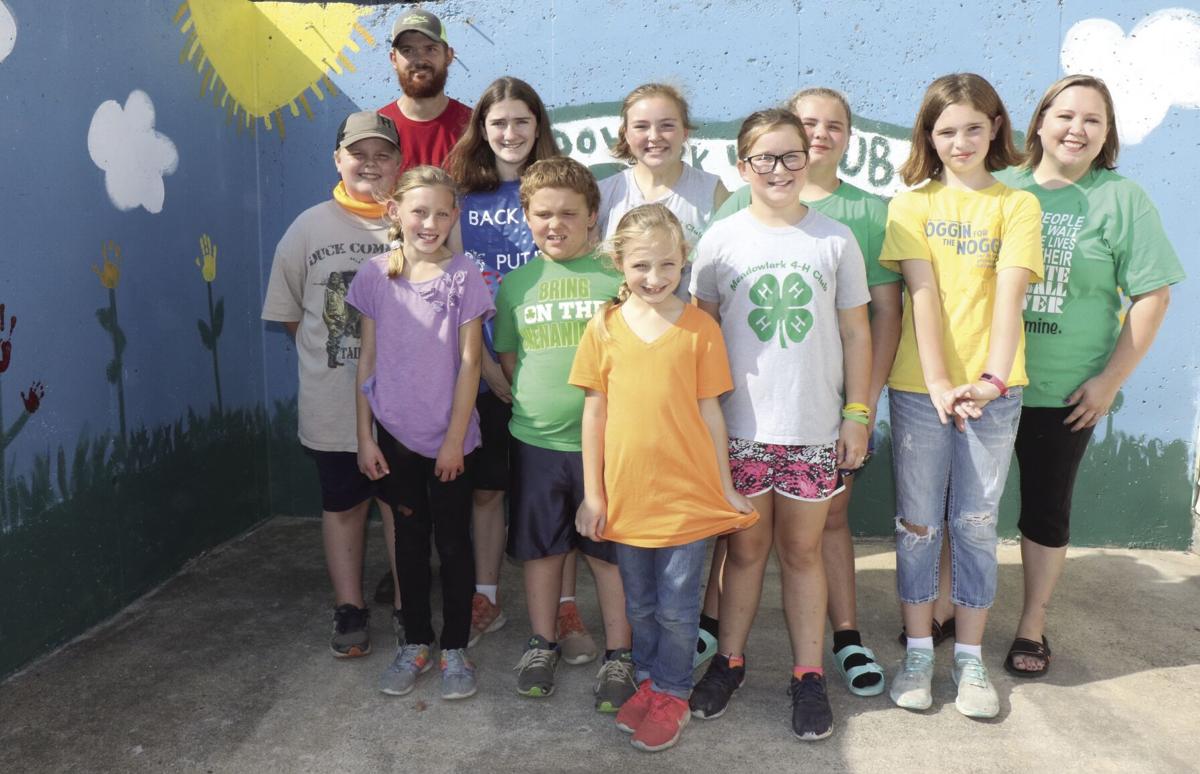 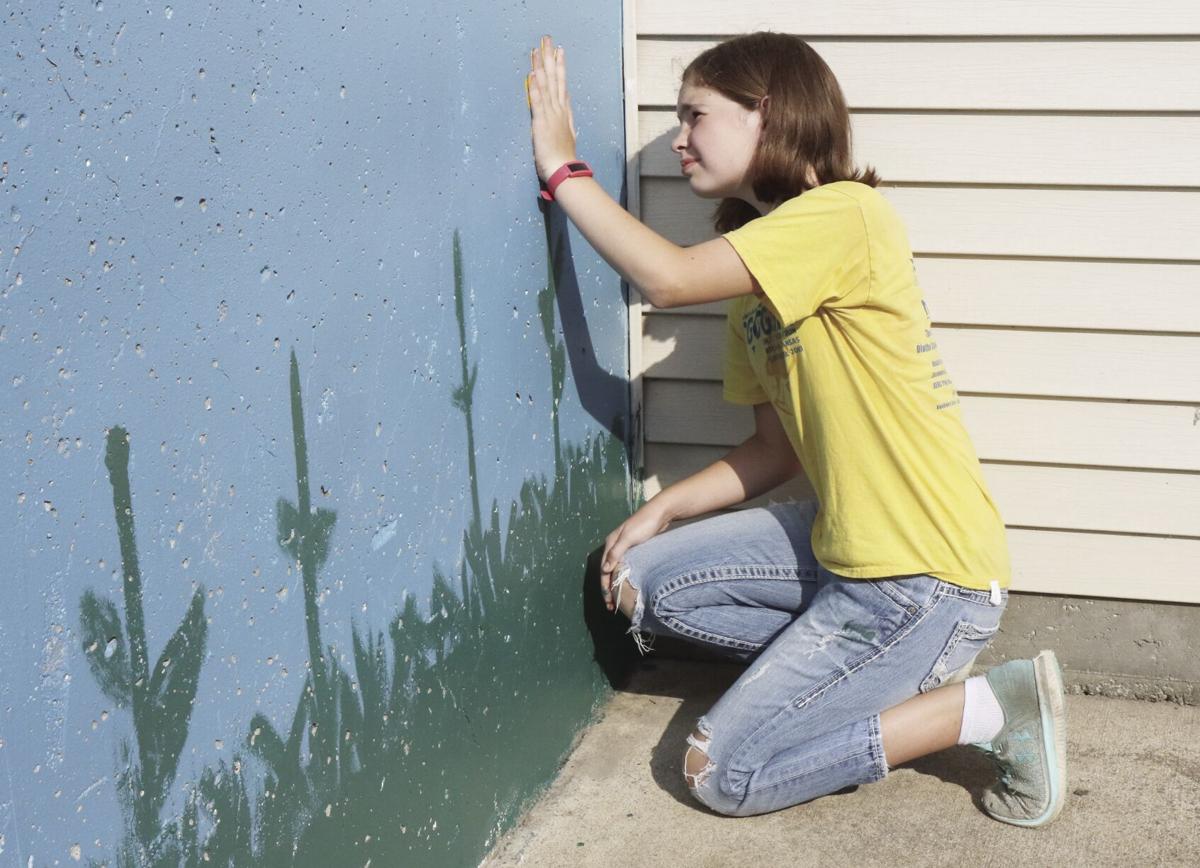 Grace Roloff, 11, presses her hand print to make a flower to adorn the outdoor dining area at Subway as part of a 4-H service project. 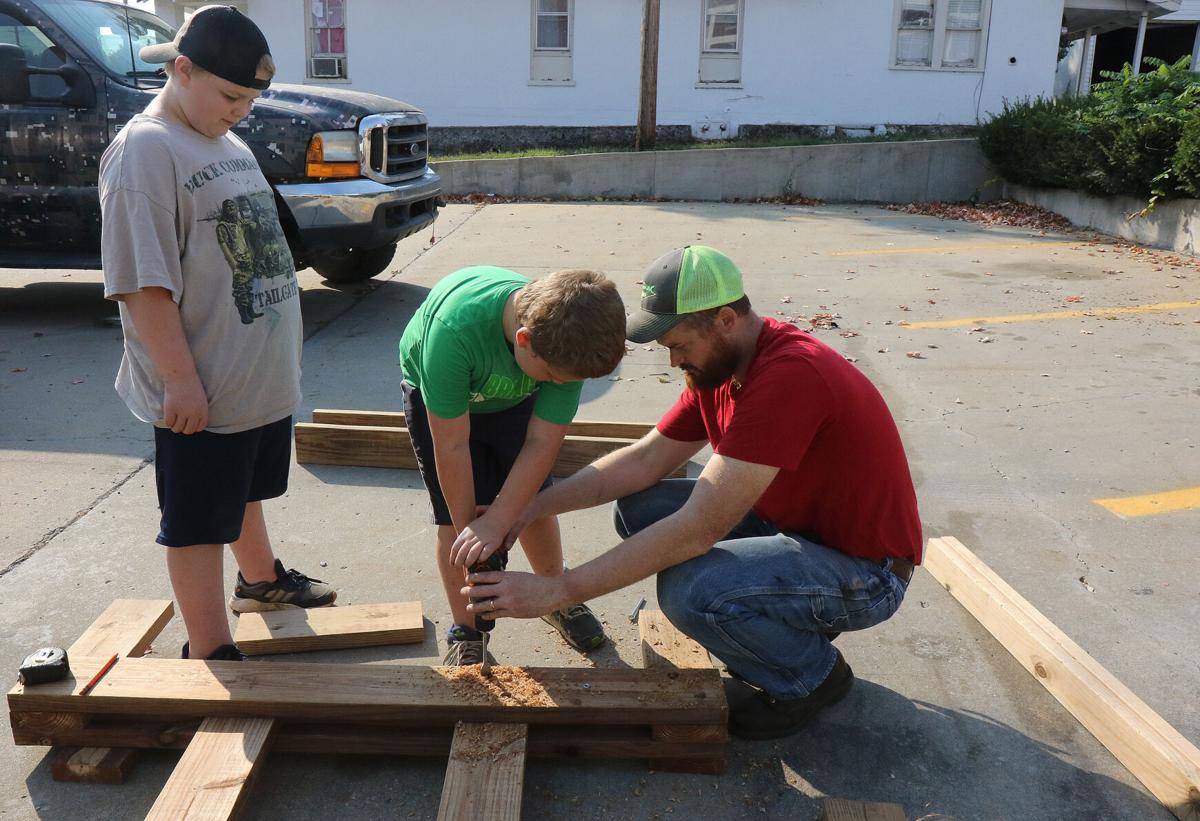 Garret Stirton, left, looks on as his younger brother Tate Stirton, gets his first power tool experience from Club Leader  Jacob Reiss, the Stirtons are enrolled in the 4-H woodworking project.

Grace Roloff, 11, presses her hand print to make a flower to adorn the outdoor dining area at Subway as part of a 4-H service project.

Garret Stirton, left, looks on as his younger brother Tate Stirton, gets his first power tool experience from Club Leader  Jacob Reiss, the Stirtons are enrolled in the 4-H woodworking project.

For some families 4-H work is the glue that bonds the learning by doing experience together for community.

Meadowlark 4-H Club members were present Saturday, Oct. 10 to collective contribute 48 hours of their time to leave their mark and freshen the concrete wall partially surrounding the outdoor dining area at Subway near the Fifth Street viaduct along Highway 59. Members and leaders also constructed a new picnic table as well.

Current Leader Jacob Reiss was one of the Meadowlark 4-H members who first painted and embellished the wall about 15 to 20 years prior to recent service project event.

Jacob’s mother, Janice Low Reiss, was a 4-H member when the club organized decades in the latter part of the 1970s. She’s had a steady involvement throughout the decades. In adulthood Jacob and his wife, Jessica are raising their children with 4-H involvement.

Second-generation members of the Meadowlark, were 8-year-old Tate Stirton and Garrett Stirton 12, not only were the Stirton brothers painting a bit, but they shared their first hands-on experience with a power tool while helping to construct the wooden picnic table. The Stirtons are enrolled in the woodworking project.

Jacob’s dad, Don Reiss was also on hand Saturday to work on the table. Ryan Molt directed the painting efforts.

Janice Reiss estimated the wall has been refreshed a few times in five-year increments. This year the 4-Hers embellished the wall with their own colorful hands-on approach. Their handprints are the flowers atop the stems that seem to stretch toward a sunny sky.

Other Meadowlark members present representing a multiple generation of 4-H family involvement with other clubs are Hallie and Tenley Noll, second-generation 4-Hers; Leader Ashley Henning has a fourth generation connected to 4-H; and Grace Roloff is the daughter of a former 4-Her.

The 48 hours of service day is a statewide initiative. Traditionally, October is 4-H Month to join a club or get involved contact the Atchison County Extension Office for more information at 913-833-5450.